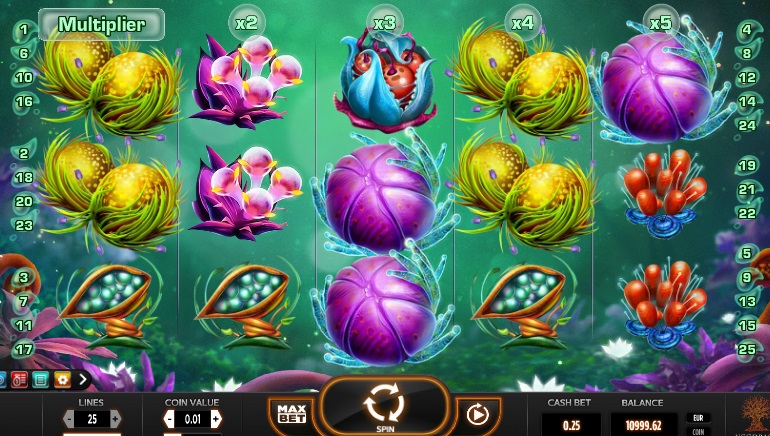 Everything you want to know about the Fruitoids Video Slot from the house of Yggdrasil Gaming.

One of the newest games in the already stellar Yggdrasil arsenal was released in May 2014 and has become one of the most popular video slots at a number of online casinos. The game is another prime example of an exciting, easy-to-play slot, which is only their fourth out of six video slots altogether.

Get Your Fruit On

This game is not your average fruit machine by any means. The captivating graphics and overall design of this game is one of Yggdrasil's best releases and players have been leaving positive feedback regarding its uniqueness. The buttons are big and easy to find, even with the 'in-your-face' mutant fruit animations and symbols making the game accessible to everyone of legal age.

Fruitoids has 5 reels, 3 rows and 25 paylines but there are many ways to boost ones score and win lucrative cash.

Not only does Fruitoids have a freeze and re-spin feature, there are also a number of multipliers to be won.  At the top of each reel, the multiplier is mentioned and as the game columns begin to fill up, each one awards the player with the said multiplier.  An excellent bonus can seriously affect ones winnings. Players lucky enough to fill all three columns will have their winnings multiplied by up to 5x the amount.

Software Development at its Best

Yggdrasil is a relatively new software developer, which become popular due to their numbers-based games like online lotteries. They have grown since their early games were released and have become one of the most sought after brands in the business. Yggdrasil's games can be found at some of the top ranking casinos and Fruitoids is available at Vera and John and EuroSlots Casino.

Players have grown fond of all of their new titles but Fruitoids is especially popular.

The Dark Knight Video Slot Is Out