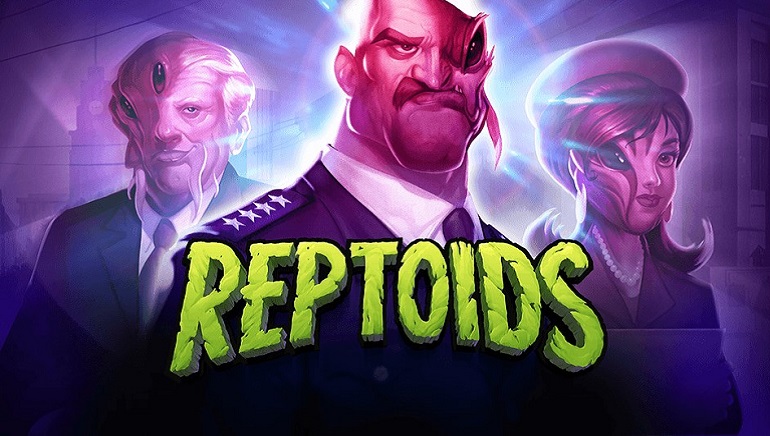 New from Yggdrasil, the Reptoids slot machine is based on the concept that aliens have infiltrated the government as part of a sinister plan to take over the world. It's a fun, 1960's-set game that comes with some innovative bonus features like a scanner that creates extra winnings when it detects an alien.

Spinning Up A Conspiracy

The alien action takes place over 5 reels and 20 paylines, all presented against the backdrop of a military base. The theme is carried over to the badges that make up the lower value symbols, while bigger wins come from the various army and government personnel that could be aliens in disguise.

A unique detector appears in random places on each spin, and if a character symbol appears within its frame, revealing an alien, all examples of that character on the reels will turn into wild symbols, completing winlines if they are in the right places.

If the high-value scatter symbols appear in the detector, players are awarded an initial 7 free spins, and all Reptoids that are discovered will stay locked in place for any remaining bonus games. Extra bonus games are awarded with more aliens found.

The Arrival Is Imminent

The fun theme and innovative bonus features of the Reptoids slot game will be landing at online casinos in November. Designed for play across desktop and mobile platforms, it comes with the special Missions feature of Yggdrasil, which helps player retention rates.

Jonas Strandman, Head of Slots at Yggdrasil said: ''We are very happy with how we've combined the Reptoids concept and mechanics into a perfect fit, which makes gameplay both intuitive and easy to follow for newcomers. Seasoned slot players will also appreciate the strong chance of big wins in the base game.''

''We must also mention the game's thrilling trailer, which showcases the high-quality we aim for in our everlasting quest to offer a first-class experience in all our slots.''