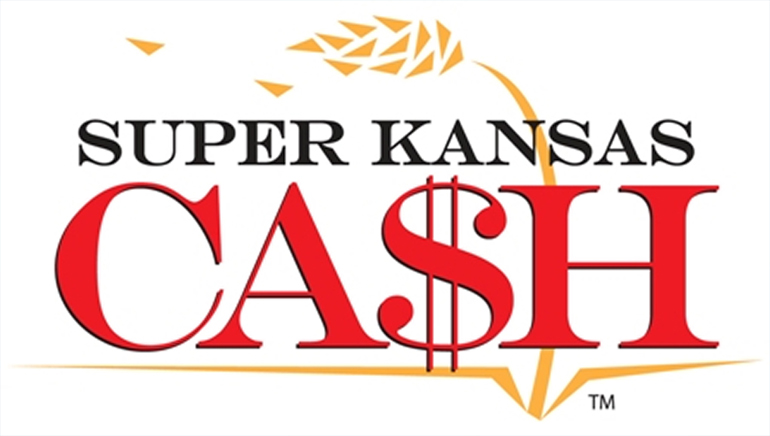 All winners are paid in one lump sum.

Super Kansas Cash, a traditional lotto jackpot game, is offered by the Kansas Lottery and is a Kansas-only game. The lotto game was first introduced to Kansas in 1988 albeit under a different name. It has undergone a number of modifications over the years. The new Super Kansas Cash game which came into being in February 2002 is an enhanced version of the Kansas Cash game and now offers more ways to win.

The minimum jackpot is $100,000 and rolls over to the next draw if it is not won. All winners are paid in one lump sum. The overall odds of winning a prize are approximately 1 in 12 and the odds of winning the jackpot are 1 in 2,517,200 which are more favorable than many other American lotteries.

Drawings for this lotto are held on Monday, Wednesday, Saturday.

To play Super Kansas Cash select and mark five numbers, from 1 through 32 and one number from 1 through 25, on two boards. Each play costs just $1. Place a heavy vertical mark in the number boxes that you wish to play.  Or you may prefer to have the computer randomly select your numbers for you and ask for a Super Kansas Cash Quick Pick. You can also play the same numbers for two, three, six, nine, 12 or 15 consecutive drawings, by marking the appropriate "Multi-Draw" box on the left side of the game slip.

There are eight prize divisions which are as follows:

The jackpot amount will be divided among multiple winners.

The jackpot begins at $100,000 and rolls over to each draw until it has been won.

The current record for the Super Kansas Cash jackpot stands at $3.14 million which was won on 4th December 2006 by Tammy Shuler. Other notable jackpot winnings occurred in April 2004 and June 2008, when the same lady, Hope Higgins, won the Super Kansas Cash jackpot  twice. The first time she shared a jackpot of $3.05 million and then won $1.2 million just 4 years later.

A minimum of 45 per cent of total ticket sales must be paid back to the players through the prize fund.

Since the Kansas Lottery began in 1987, more than $68.2 million has been transferred to the state of Kansas to fund economic development initiatives, prison construction and maintenance projects, local juvenile detention facilities, problem gambling assistance, and the State General Fund.

Would you like to learn more? Visit the following link for more details and information: kslottery.com.