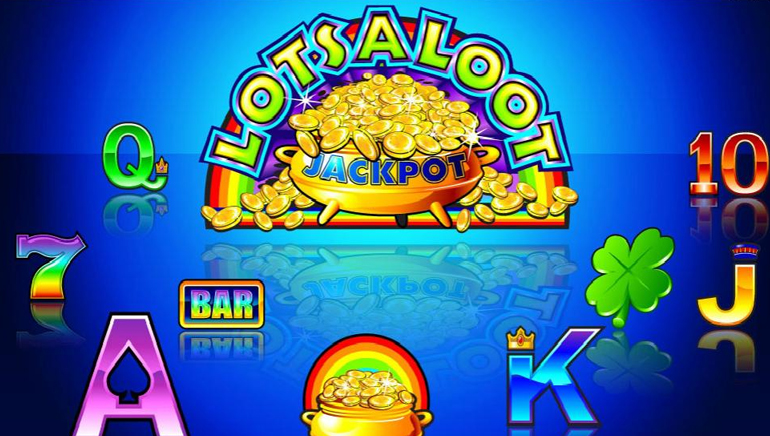 LotsaLoot progressive jackpot – a traditional way to win a fortune.

LotsaLoot is a classic online slots machine with a progressive jackpot thrown in to give players that bit more to play for.

This game has two versions; a 3 reel 5 payline game and a 5 reel 25 payline machine. Both are linked to the same LotsaLoot online progressive jackpot.

If you get three LotsaLoot symbols on the fifth payline the progressive slots jackpot is yours.

The seed value of this jackpot is 2,500 coins. The average win is an impressive $22,726 and the average frequency is just seven days.Sometimes though this jackpot is hit several wins a week so whenever you play there's always that tingle of anticipation.

The LotsaLoot online slots game uses traditional symbols such as single, double and tripe bars and sevens.The 5 reel version has additional classic symbols including a four leaf clover, playing card characters and pot of gold.They may look and feel the same but both games have their own variations.

This has a fixed coin size of 50 cents and a max bet of $2.50. There is a LotsaLoot symbol that acts as the wild and can substitute for any other symbol in order to help players form a winning combination. If the wild forms part of your winning hand then it acts as a multiplier of two. If you have two wilds then your winnings are quadrupled.

LotsaLoot symbols also pay big when you get three on an enabled payline. If you get them on the 1st, 2nd, 3rd or 4th payline then you can win between 1,000 and 2,500 coins.

This has a fixed coin size of 10 cents and also has a max bet of $2.50. The LotsaLoot symbol is a wild symbol in this version of the game too. You can pick up 10,000 coins if you get five LotsaLoot symbols on any of the first 24 paylines but the big money is won if they appear on the 25th line.

LotsaLoot was launched in 2004 and quickly won over online slots fans. Its colorful symbols and traditional feel, twinned with all the excitement of a regularly-hit progressive jackpot made it stand out from the start.

This popular Microgaming online slots has fans all around the world and their continued loyalty to the game sees the progressive jackpot climb high even though it is regularly hit. The biggest win ever was byDon H. who won $122,289.13.

This online slots game lives up to its name and regularly delivers a big cash prize to lucky players. Could you be the next one to win?