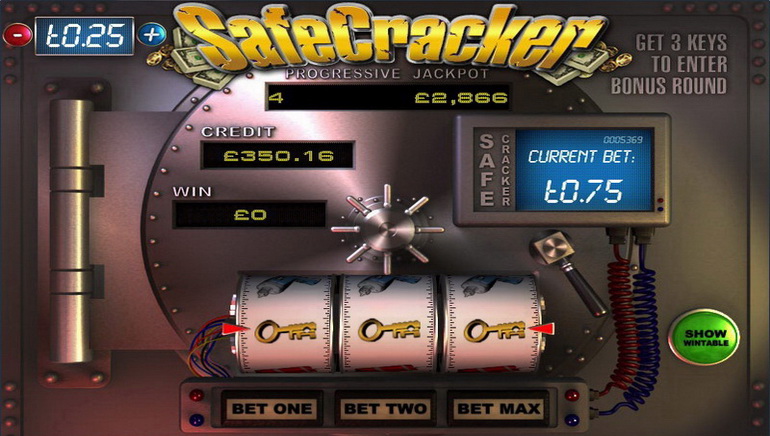 Crack the Safe and Win Big with Safecracker!

To win the jackpot, you will need to reveal three Cash symbols.  Don’t forget that your eligibility for the jackpot is based on the size of your bet.  You can only win the entire jackpot if you place the max bet; it’s a fair trade for the contents of the safe!  By placing a smaller bet, you are still eligible to win a portion of the jackpot.

This progressive jackpot game is really easy to play.  You begin by choosing coin sizes which are between 25 cents and $5, while the bet sizes range from 1 to 3 credits.  Some of the symbols for this game include the Dynamite, Drill, Crowbar, Safe and Key which is the bonus game symbol.

The bonus game is triggered when three Key symbols appear on the reels.  In the bonus game, you simply need to open boxes to reveal your prizes.  There are 10 boxes and 3 of them will trigger an alarm that stops the bonus game.

The biggest jackpot ever hit in Safecracker occurred in April, 2010.  The size of this jackpot was $88,179.  There have also been other large jackpot wins including:

As of July 2014, there have been a total of 51 recorded jackpot wins and the average jackpot size is $52,487.  The jackpots for this game have been tracked and recorded since December 2009.