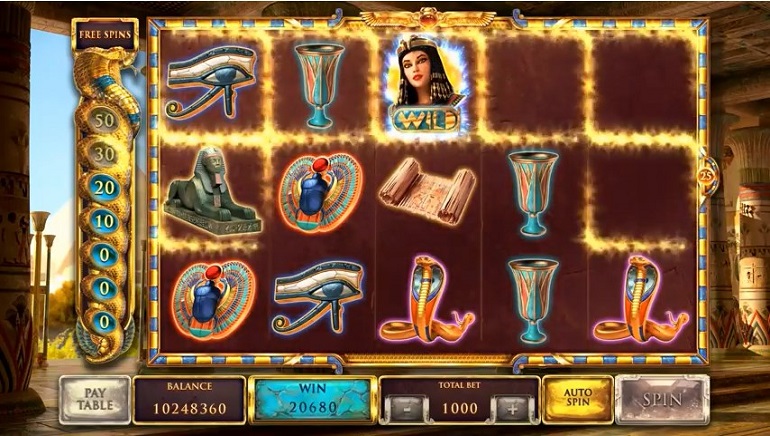 Red Rake Gaming have just released the Egyptian-themed Asp of Cleopatra slot game, which features the famous Queen, snakes and other classic icons of ancient times.

The Asp of Cleopatra is a new slot game from Red Rake Gaming that takes a popular theme and adds in some rewarding bonuses such as free spins and a unique Gods Roulette feature.

Spinning For The Riches of Ancient Egypt

It's a classic 5-reel slot, where symbols are in 3 rows and they are crossed by 25 paylines. The topic of Egypt has been covered numerous times, but Spanish developer Red Rake Gaming have given this game some exceptionally realistic 3D images of papyrus scrolls, a Sphinx statue, cat and the Ankh to make it stand out from the crowd.

The background image of a palace and the coiled snake that makes up a free spins counter to the side of the reels completes the attractive picture.

Added attractions include a reels re-spin feature which sees any symbols that are part of a winning line disappearing, leaving spaces for new ones to fall into, and potentially creating another win-line.

Any 4 consecutive re-spins will earn free games, with the coils of the snake revealing up to 50 bonus spins. There's an extra wild symbol in play throughout these, and they can be retriggered over and over to a maximum of 1000 spins.

Cleopatra herself turns up as a high-value wild symbol, expanding across reels to help players land more wins, while a bonus symbol takes them to a new screen where they play the Gods Roulette mini game.

Players pick either Anubis or Horus as their Gods, and click to spin a wheel that has guaranteed bonus values on it. If the wheel stops on the colour represented by the God, they can spin again and collect a multiplier of up to 100x, while getting the choice wrong still results in a win, but then the round ends.

This new slot is ready for play at online casinos powered by Red Rake Gaming.