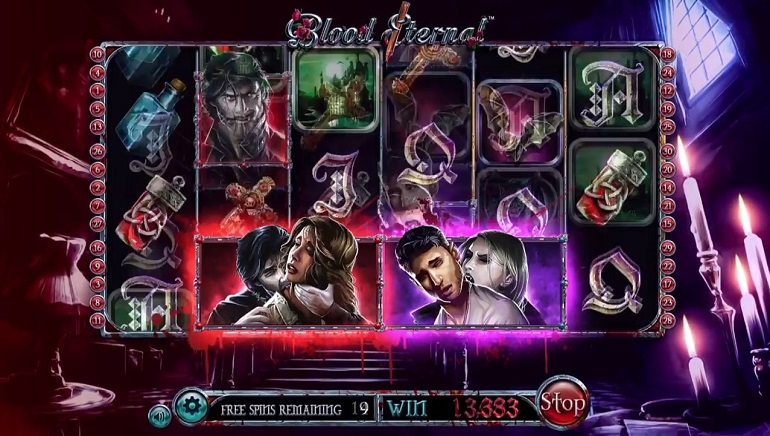 Blood Eternal is the latest addition to Betsoft's Slot3 collection, featuring a vampire theme and some interesting features to keep you spinning those reels.

Betsoft has established its position as one of the industry leaders when it comes to developing 3D slots featuring stunning graphics and visual effects that significantly enhance the gaming experience. The company managed to do this in particular through their Slots3 collection, which they constantly expand with new titles. The latest addition to the series is the Blood Eternal slot, featuring the always-popular vampire theme.

Setting up the Atmosphere

Blood Eternal takes players inside an abandoned, dark mansion, which clearly serves as a hideout for the vicious creatures of the night. Inside the house, the only light comes through a small window and from the burning candles in the corner, setting up the scene for this scary, intense game.

Symbols on the reel accompany the main theme, with vampires and unwitting humans playing the main role. There are also bats, red and blue potions, decorated crosses, and scary stone statues making sure players stay on their toes for the duration of the play.

Adding to the whole atmosphere is the tense, ominous  music playing in the background.

Blood Eternal features 30 paylines across six reels and three rows. The base game is quite engaging on its own, as wins are paid both ways. However, it is a number of various features that helps this slot stand out. Like in many Betsoft slots, features aren't triggered by landing scatters, but rather by having various symbols stop next to each other, triggering different bonuses.

Bats have a special role in the game, as this is the only symbol that comes in a regular and 2x variation, making it possible to create full lines containing up to 12 bats instead of just six. So, to get a huge win, you'll need to fill the reels with those double bats and perhaps a few Wild symbols to help you along.