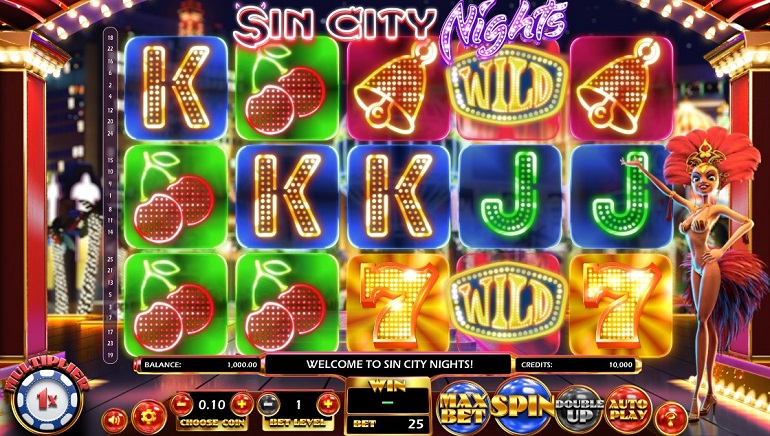 Sin City Nights, the newest slot in Betsoft Gaming’s popular Slots3 series, has just been released at Betsoft online casinos. With a showgirl as the host, an amazingly funky soundtrack, and flashy symbols on the reels, Sin City Nights gives you a taste of Las Vegas without ever having to leave your home.

Sin City Nights is a 5-reel, 25-payline cascading video slot with wilds, multipliers, and special features that allow players to increase their winnings just by spinning.

“Sin City Nights is an incredible callback to the Vegas we all know and love,” commented Stephen Jackman, Head of Product Development at Betsoft. “The smooth funk of the soundtrack enhances the strong retro styling of the game, perfectly encapsulating those simmering Las Vegas nights while the wins keep rolling in and piling up with the ever-growing multiplier function.”

When three symbols appear on any active payline, the Free Spins Bonus Round is triggered. During this round, all winnings are multiplied 3x and the base-game multiplier is still in play, so players can end up winning up to 15x their original stake.

There is also a Double Up Feature that allows players to potentially double the amount of each win.

Betsoft Gaming is known in the iGaming industry as a leader in true 3D cinematic gaming. To date, their game library consists of over 180 games, including their popular Slots3 series. Betsoft Gaming serves a wide range of clients, including some of the top gaming operators in the industry.