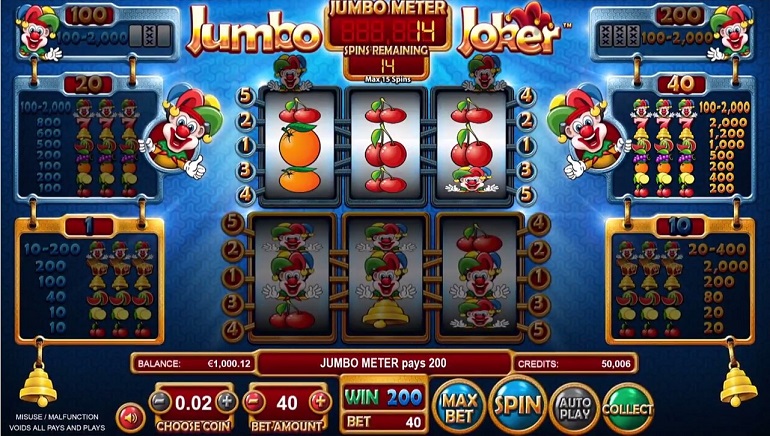 Jumbo Joker is played on two set of reels, with the second one being activated after each win, allowing players to go for bigger rewards.

In the world of online casino gambling, Betsoft is a company best known for developing elaborate 3D games with interesting features and immersive gameplay. What they most certainly aren't known for are classic slots, but the company has demonstrated the versatility of their development team with the latest slot to appear in their library named Jumbo Joker.

Unlike intricate modern slots with fancy graphics and and numerous bonus features, Jumbo Joker takes players back to the roots, offering a true classic feeling in every sense of the word. Symbols on the reels are the ones usually found with old slot machines: bells, cherries, lemons, watermelons, and, of course, jokers.

The sound plays its part in making this slot what it is, without fancy sound effects or special soundtracks playing in the background. Classic sounds of a slot machine are complemented only by other slots chirping in the background and indistinct chatter of other players, all of which helps create a real casino atmosphere.

Jumbo Joker is similar to classic slots by other developers, such as Jackpot Jester games by Nextgen Gaming. There are two separate sets of reels one on top of the other. The bottom set of the reels is where the action starts, but things get really interesting once a player gets on the top set of reels.

To reach the second level, it is necessary to play with all five paylines active, as the slot lets players choose between a single payline and all five of them. Every time there is a win playing on all five paylines, the amount is transferred to the Jumbo Meter and players can either collect the amount or use it to spin the upper set of reels.

Spins on the second set are much more expensive, but rewards are also much bigger. There are extra symbols as well, such as grapes and 7s, and every single joker landing on the reels will award a random amount from 100 to 2,000 coins.

Those who enjoy classic slots will find that Jumbo Joker offers a lot of entertainment. In an era when everyone's competing to build a more complex and elaborate slot machine, this game offers a nice change of pace.