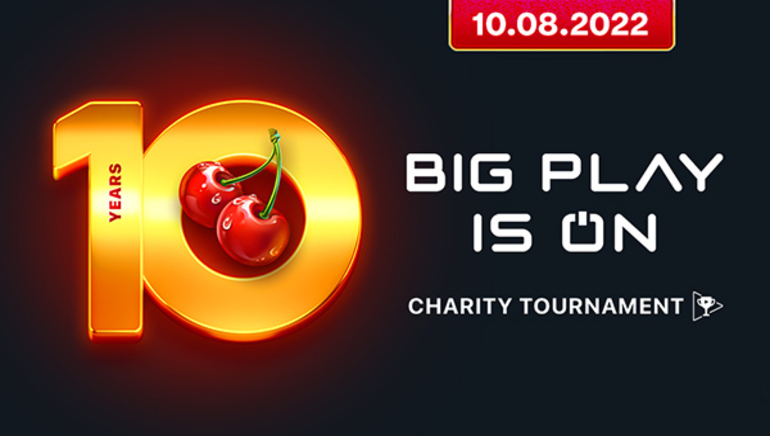 Playson invites everyone to sign up for the charity slot tournament on August 10 and celebrate the company’s 10-year anniversary while doing the right thing.

Playson is celebrating a decade of existence, which represents a very important milestone for the casino game development company. The 10th anniversary is a special moment that they want to celebrate in the most appropriate manner possible. Given the hardships suffered by the population of Ukraine, the charity tournament hosted on this occasion is dedicated to residents of this country.

Have Fun and do the Right Thing

Playson’s most recent promotion is perfect for those who appreciate slots and enjoy shopping online. On August 10, you can hit two birds with one stone and take part in the special charity tournament that celebrates the 10-year anniversary. In an attempt to unify the iGaming industry and raise more money for Ukrainian charities, the company is running a special competition. Those who participate and spin their wheels on selected slots will have the chance to win an Amazon gift voucher.

Anyone can participate and with a massive prize pool of €10,000, there are strong arguments in favor of tagging along. In addition to competing for a share of the prize pool, players will also have the immense satisfaction of doing the right thing. That's because the moment you sign up for the tournament, you will be supporting one of the select charities. Prytula Foundation, Come Back Alive, Tabletochki, Be Kind, Dobro, and Enjoying Life are the beneficiaries of this generous promotion.

How does the Charity Tournament Work?

Playson has high expectations from this event and wanted to be as inclusive as possible, so anyone can take part and do the right thing. The goal is to bring together as many people as possible and the company will boost the price bold by €5000 if at least 500 players sign up. The top ten most successful players will receive an equal share of the guaranteed price pool, equal to €1000 each. They get to choose what charity benefits from this amount, which will be donated in their name.

On top of the generous donation that will change things for the better, winners will also be awarded an Amazon gift card. This is worth the equivalent of $100, so the top ten players will feel like winners and shop for free at the biggest online retailer. The tournament starts at noon and concludes 10 hours later, so you should participate between 12:00 AM and 10:00 PM. To qualify, you need to record at least one win and claim 10,000 virtual coins, so you move up the leaderboard.