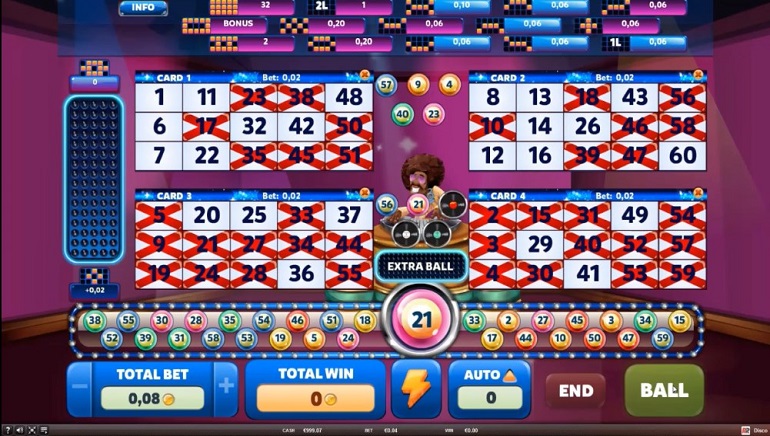 Red Rake Gaming has launched a new Video Bingo game, setting Disco Nights in a nightclub where a DJ spins up wins over four cards

Players can enjoy the groovy music and style of Disco Nights, a new Video Bingo game from Red Rake Gaming that sees a DJ surrounded by 4 cards and comes packed with funky features such as a wild ball, wheel of fortune round and a dance floor mini game.

The cartoon style and disco era soundtrack set the scene for an exciting Video Bingo game that can be played on desktop computers, mobiles or tablets. Surrounding the cool DJ are 4 cards each with 3 rows of 5 numbers and 21 different patterns to land for a winning round.

A special feature sees extra balls represented by 10 vinyl records which appear when players are close to completing a pattern. Players have the option of buying these extra balls to try for a win, while there's also free balls awarded at random.

They could also receive a wild ball that can be used to replace any number on the cards to help finish a pattern, with either the player choosing which to replace, or if it's easier the game can do it for them.

When Bonus patterns are completed, players head to the dancefloor in a fun side game, where an Elvis type character is standing next to coloured tiles on the floor. Players click tiles to complete combinations of colours, or to get extra turns at finishing a winning line.

An accumulator window to the side of the game fills up as players land certain patterns and once completed a wheel mini game is triggered. Spinning the wheel adds multipliers to accumulated wins and can lead to some of the top rewards.

This fun and colourful game can be played in multiple currencies including Euros, British Pounds and USD, and languages such as English, German, Spanish, Italian and French.