Fall In Love With The Mighty Aphrodite Slot From Rival Gaming 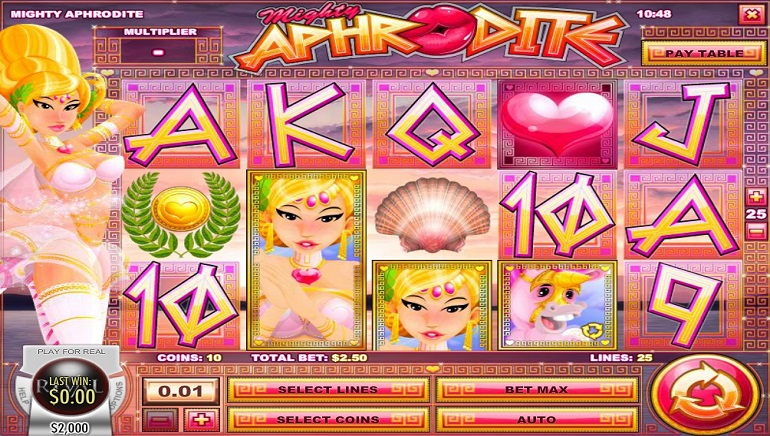 Mighty Aphrodite is a slot from Rival Gaming which features cartoon Cupids, a pink Pegasus and the beautiful Goddess of Love, who is a stacked wild symbol.

Aphrodite was the Greek Goddess of Love and Rival Gaming are hoping that players will fall in love with their latest slot game. Mighty Aphrodite is a cartoon style game, dominated by vivid shades of pink, the colour of romance. Classic Grecian geometric patterns surround the reels and each symbol position, while behind them, a setting sun turns the sky into even more pink hues and an animated Goddess stands to one side of the game.

Assisted by Cupid, the messenger of love and Pegasus the flying horse, Mighty Aphrodite brings the gifts of stacked wild symbols, free spins and random multipliers to players.

Mighty Aphrodite is a 5-reel, 25-line slot where many of the winning combinations will be created by the Greek-style high card symbols. The top prizes are claimed when symbols of love hearts, a harp, vase,  or laurel wreath appear. The beautiful Aphrodite herself is a wild symbol who is stacked on the reels and worth up to 500x the line stake.

After any winning spin, baby Cupid can appear at random and fire an arrow at the reels, multiplying the value of the win by up to 5x. The flying horse Pegasus is depicted as a pink unicorn, and this cute character is a scatter symbol who triggers a free spins game whenever he's seen in any 3 or more places.

The number of spins awarded depends on how many Pegasus symbols appear, with 3, 4, or 5 launching 7, 11, or 21 spins respectively. The spins can be retriggered if more scatter symbols appear at any point in the round.

Finding Love On All Devices

The heavenly reels of Mighty Aphrodite can bring some divine payouts to players and this slot can be played on desktop or mobile platforms for as little as 0.25 per spin at Rival Gaming online casinos.