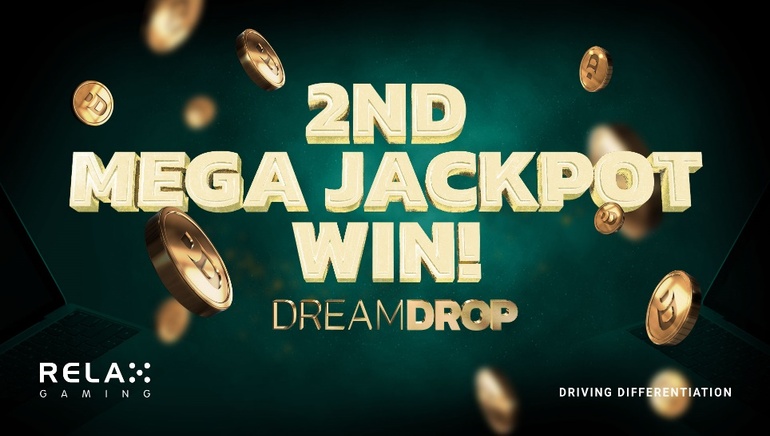 The Dream Drop Mega Jackpot worth nearly €1 million was won by a lucky player spinning the reels of a popular Relax Gaming.

Relax Gaming is a leading iGaming aggregator with a reputation for supplying unique content to top casinos. One of its most innovative concepts, the Dream Drop, has lavishly rewarded a lucky player who recently hit the Mega Jackpot. This is the second time the major jackpot has been secured, and on this occasion, it happened on the White Hat Gaming network. The winner walked away with a massive €924,386.51 while spinning the Temple Tumble 2 Dream Drop reels.

Dream Drop was released two months ago, so the fact that two Mega Jackpots were already won is nothing short of impressive. This is its largest prize, but the Rapid, Midi, Maxi, and Major payouts are just as appealing. Even though they pale compared to the Mega Jackpot in terms of sheer amount, these lower jackpots are hit more often. The Major Jackpot is particularly appealing and with 17 of them won so far, the Dream Drop's surging popularity is easy to explain.

Since Relax Gaming came with this new concept, more than 400,000 players have won one of these smaller jackpots. They can be won by players who spin the reels of Relax Gaming's Temple Tumble 2 and Snake Arena. This is just the tip of the iceberg, and the software developer intends to add it to several of its popular games by the end of 2023. The company has a massive portfolio of more than 4000 games, and its proprietary slots are appreciated by punters who play at top licensed casinos.

The Hottest Product of 2023 in iGaming

New concepts usually need a lot of time to be adopted, but players wholeheartedly embraced the Dream Drop immediately after its unveiling. Simon Hammon, CEO of Relax Gaming, expressed his confidence in the potential of this concept and was the first to congratulate the lucky Mega Jackpot winner. The product was designed to add a new layer of excitement for casino enthusiasts and enjoys tremendous success.

Kola Okoko, Head of Content at White Hat Gaming, highlighted Dream Drop's popularity and positive impact on the network. Relax Gaming has a long and distinguished track record as a leading B2B supplier, with prestigious awards won over the years. The "Best Mobile Gaming Software Provider" is the most recent accolade at the prestigious EGR B2B Awards. Innovative concepts such as the Dream Drop jackpots are what they need to maintain the dominant position.