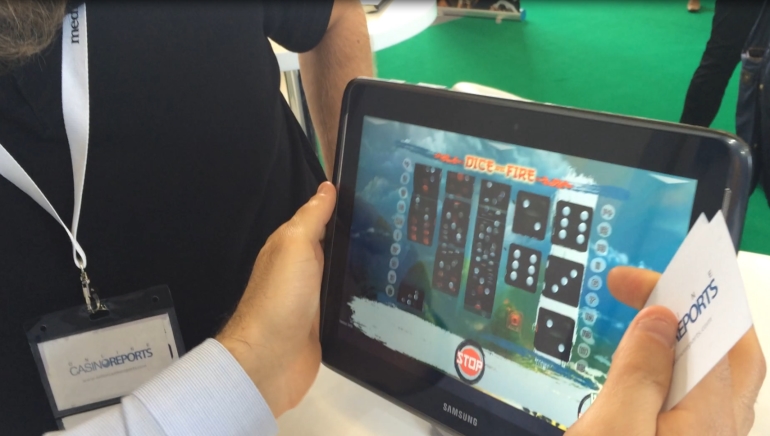 Last week saw the converging of one of this year's biggest events, the 2014 Amsterdam Affiliate Conference. A natural part of the event revolves around the unveiling of new technologies, and our very own delegates from Online Casino Reports who were on the exhibition floor recorded footage of an interesting technology incorporated into mobile slots. Check out the video below.

Played on the tablet, the game Dice and Fire by Topgame can be controlled not only by touch, but also by actually shaking the tablet to spin the reels. This adds a whole new immersive dimension: Look how the game responds almost immediately to the shaking motion and how it blends in naturally with the regular finger-swiping order of play. How does it work?

Accelerometer is the answer. This is a feature which is found in most smartphones and tablets nowadays, namely iPhones, iPads and Android tablets (like the Samsung Galaxy tablet seen on the video). Accelerometers allow digital devices to measure the exact orientation in which they are found. This is how the smartphone/tablet detects if you're using it in a horizontal or vertical position, shifting its view panel accordingly.

As seen in the video, there are slots designated for smartphones and tablets which put the Accelerometer into use, something which we expect to see more at online casinos in the future. Dice and Fire is a good example for a mobile slot making use of that. Neatly designed in a Far East theme with 5 reels and 20 paylines, Dice and Fire features a 3-stage bonus feature alongside gamble rounds which let players multiply their wins. Players who are interested in trying this unique experience by themselves can find the game over at Onbling Casino, Loco Panda Casino, Grand Parker Casino and Classy Coin Casino.

New All Slots Mobile Site Launch, Check it Out Today