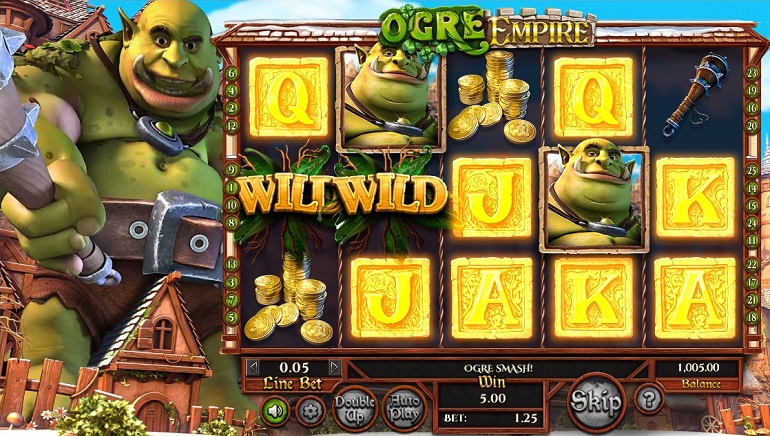 Betsoft Gaming is responsible for developing hit video slots in the form of Giovanni’s Gems, Frankenslot’s Monster, and Fire & Steel: War of the Wilds. And now the software provider has returned with the release of the brand new Ogre Empire slot, which will be ready to play at Betsoft casinos from late-May 2018.

Ogre Empire stars a massive, hulking green creature that bears a resemblance to the movie character Shrek. This particular ogre stands tall alongside a slot interface of three rows by five reels, while Betsoft has presented players with 25 fixed paylines that they can wager on.

In the gameplay, Betsoft allows for players to wager from a minimum of €0.25 up to a maximum of €25.00. And the process can also be automated, with Betsoft enabling players to assign a specified line bet, number of spins, maximum loss, and maximum win as conditions for halting auto-play.

Each time of day carries its own benefits, with the light bringing forth wild flowers that can turn up to three nearby symbols wild. Betsoft has also made it possible for the ogre to smash reels during daytime, thus causing new symbols to fall down the screen.

Wild flowers can also sprout at nighttime, while the joker, queen, and king symbols will appear from behind their letters at night to deliver enhanced winnings. Finally, Betsoft has also built in a mini-game that can potentially double up winnings after a successful spin.