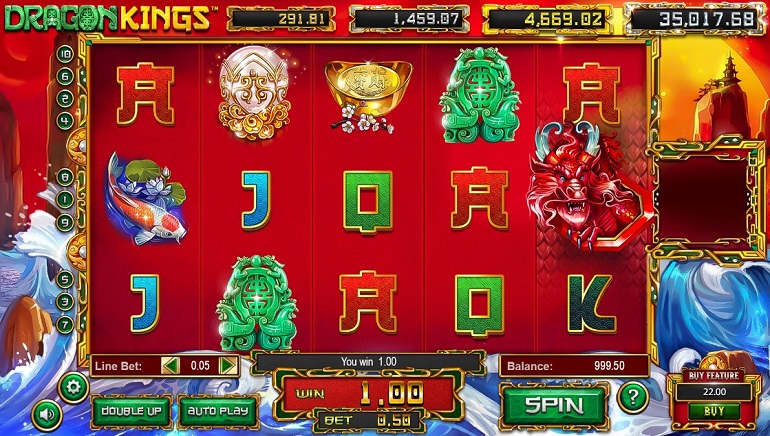 Take to the high seas of ancient China with the Dragon Kings slot from Betsoft. Wild dragons occupy each reel and a majestic King Dragon fills the centre of the game, helping to trigger free spins and jackpots

Based on the tales of four dragon spirits who controlled the seas surrounding China, this slot sees the five red-hued reels set against contrasting blue waves. Along with classic playing card symbols, there's jade statues, lucky coins and golden bowls creating wins when they land across any of the ten paylines.

Four colourful dragons are wild symbols, each occupying their own reel, and each bringing good fortune upon players. The Azure Dragon locks any other dragons in place for a free respin, while the White Dragon copies itself onto reels one or three when it appears. The Red Dragon pays out random multipliers of up to 400x the line stake, and the Black Dragon triples any wins that he helps to create.

King Of The Dragons

A special fifth Dragon rules over the waves and can fill the middle reel, doubling any winning combinations that he completes. If another dragon is seen at the same time, they work together, multiplying wins by up to 2000x, while also activating a sixth reel. A pearl symbol on this reel will trigger up to 50 free spins, while combinations of the pearl and dragons will trigger progressive jackpot wins.

Dragons For All Devices

Dragon Kings can be played on desktop computers as well as iOS, Android and Windows powered mobile devices, found at Betsoft online casinos.

Commenting on the new release, Betsoft’s head of product development, Dan Cooper has said “From the dragons themselves, who have strong visual identities and cool powers, to the creative jackpots, we believe Dragon Kings contains the best of modern slot game design: a unique aesthetic, a strong storyline, audiovisual excellence, and a suite of features that are both deep and accessible.”