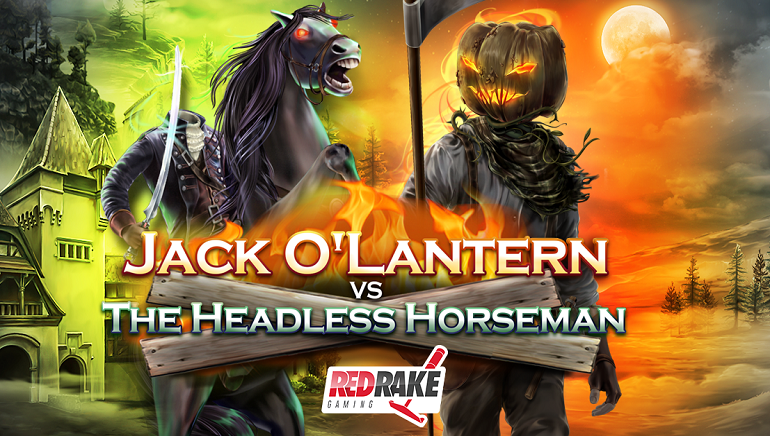 Those brave enough to play the new Jack O' Lantern vs the Headless Horseman slot from Red Rake Gaming will find that the 5 reels and 30 paylines of horror-themed action can reward them with some terrifically terrifying bonus features.

The grisly action takes place against a backdrop of a town that's bathed in the eerie light of a full moon. Like the rest of this game, it's been designed with a great attention to detail and there's a suitably haunting soundtrack adding to the atmosphere.

Detailed symbols in this Sleepy Hollow-inspired game include an axe, crucifix, lantern and headstone, while playing card symbols will complete the lower-value winning lines. The top prizes are awarded by the black horse, with its glowing eyes and decapitated rider, along with a grinning Jack O' Lantern and the cross wild symbol.

He may be scary, but the Horseman treats players to extra winnings whenever he's seen in any 3 or more places at once. The reels start to shake as the Horseman symbols expand across them, completing win-lines without needing to be on adjacent reels.

There's a fiery feature triggered when pumpkin-headed Jack O' Lantern fills the middle reel, as he bursts into flames, turning random symbols into further Jack symbols for some high-paying combinations.

Any 3, 4, or 5 bonus symbols trigger 10, 20, or 30 free spins respectively. Before these Fight of the Shadows games begin, Jack and the Horseman will battle each other, removing all the playing card icons until just one is left, which will become a special expanding symbol throughout the feature.

The combination of fewer symbols, the expanding symbol, and the fact that it won't need to be on adjacent reels, should ensure plenty of winning spins.

The high quality animations and unique bonus features will help to ensure success for this online and mobile optimised slot game from Spanish developer Red Rake Gaming, which has been releasing games since 2011. Find this one at online casinos powered by Red Rake Gaming.