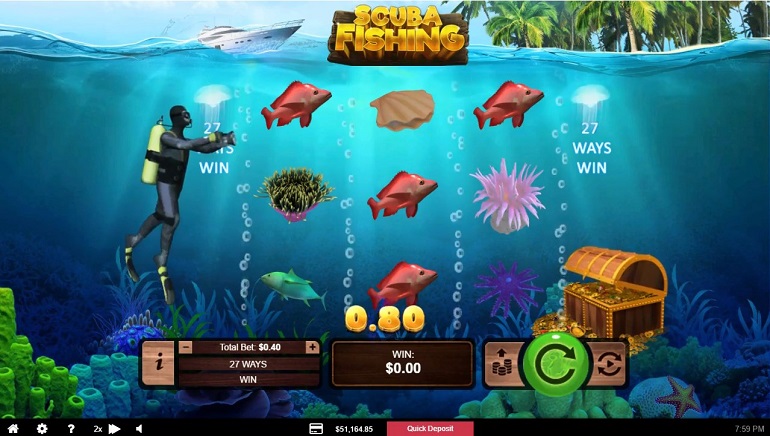 Go Scuba Fishing with the release of the brand new slot from RTG Asia. This is playable now across participating RTG casinos.

A brand new slot game is gracing the libraries of RealTime Gaming Asia casinos. As a software provider, RTG is known for bringing out hit slot releases such as Builder Beaver, Cash Bandits, Lucha Libre, Spirit of the Inca, and The Big Bopper. And now RTG is drawing headlines for the unveiling of its Scuba Fishing slot.

A pre-release trailer has revealed that Scuba Fishing is designed as three-reel slot with three rows of symbols. As a whole, the slot can display nine symbols on the screen for each spin, with RTG giving players 27 different ways of winning.

The three-reel format is different to the best-known RTG slots, but this could be due to the fact that Realtime Asia is behind the development of the game. Visually, the studio has utilised a wealth of undersea creatures for the symbols, while a scuba diver has been animated swimming at the side of the screen.

When lining up the symbols, players will have the potential to win a multiplier of up to 7,500x times their wager. Below the jackpot, however, there will be many other levels of multiplier that can be unlocked based on the combinations of symbols.

The main game symbols are relatively harmless creatures, but players should watch out for the appearance of a shark, which is going to act as the wild symbol. If players can stack three wilds in the middle reel, this will trigger a re-spin. And this is the only time in the game when the treasure chest symbol makes an appearance.