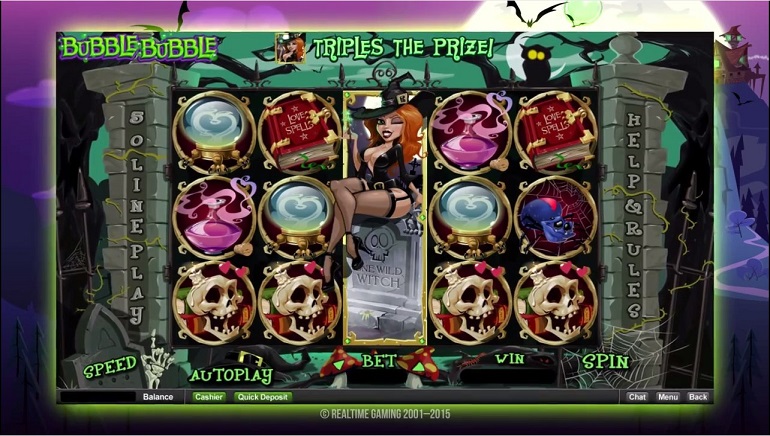 There were many impressive slots in 2017, but which ones were the most-played? Find out in this very special feature.

Another fine year of gaming has come to an end, making now the ideal moment for Online Casino Reports (OCR) to explore the top slot games by spins. In producing this recap, OCR has gathered data on the volume of slot spins from a number of leading iGaming brands and software providers.

RTG casinos showed that historic slots and can stack up against those with lighter themes. Bubble Bubble 2 is a cartoon slot starring glamorous witches, who appear in a five-reel slot with 50 paylines that also features a progressive jackpot.

From the historic side, Caesar’s Empire was another hit among RTG slots. Caesar’s Empire is slightly more stripped back with 20 paylines, but RTG has also elected to include a progressive jackpot for enhanced winning potential.

WGS is a developer known for providing gaming software to the USA. In 2017, some of the most popular slots at WGS casinos were those created with animal themes. Funky Chicks was one of them, with players able to match cute symbols over 25 paylines.

Cash Cow also proved to be a high spinner in 2017, with players seeing double the paylines of Funky Chicks. Also supporting the 50 paylines are the Pick’em Bonus and Kooky Chicken Feature, which can both unlock winnings.

For Rival Powered online casinos, it was clear that players had an appetite for exploration. Johnny Jungle seems quite safe with its five reels and 25 paylines, but the sense of action is amped by the inclusion of free spins and wild symbols.

In Mystic Wolf, players were able to take an adventure to a cold tundra from where the Northern Lights are visible. Further elements designed to draw in players were the 50 paylines, two bonus rounds, and 5,000-coin jackpot.

Magic and fantasy were the order of the year over at Pragmatic Play casinos. Wild Spells is slot with sorceresses devoted to conjuring nature, fire, and water magic. Each of the ladies can be stacked, while the slot also has a progressive jackpot with three tiers.

Dragon Kingdom goes in a different direction by featuring mythical magical creatures instead. This is a slot with beautiful ladies and an array of dragons in different colours. They can be matched on 25 paylines, but the slot also has scatter symbols that can trigger free spins and multipliers.

Microgaming is responsible for delivering new and original slots on a seemingly monthly basis, but 2017 showed that the classic titles are still big hits with players. Avalon was especially popular, with players still appreciating the King Arthur storyline and the Lady in the Lake free spins.

Thunderstruck 2 is another long-running favourite for Microgaming casinos, but this time the theme is Norse mythology. This Microgaming classic is designed with 243 ways to win along with bonus features devoted to Thor, Odin, Loki, and Valkyrie.

Genie’s Fortune showed that BetSoft is capable of developing lighter slots, with players going on an adventure featuring flying carpets that serve as wild symbols and treasure chests that can open up free spins.

Charms and Clovers was another slot feared towards fun, with leprechauns, pots of gold, Irish imagery appearing on four rows of symbols with 40 paylines. Added appeal then stems from the lucrative progressive jackpot.

The most popular Habanero slots included titles where women dominated the story. Queen of Queens 2 is designed with an extra row of symbols and can provide 1,024 possible ways of winning.

Wicked Witch showed that the spell-craft was a major theme across many different casinos. In this witching slot, players can win from 25 paylines in the base game or else target the more ambitious progressive jackpot.

And What Slots will Dominate 2018?

We've got an exciting year ahead for 2018, with many slots planned for release in the next few months and all throughout the year, from the biggest developers all the way to the newest software developers. Abundance is a key word and we are excited!