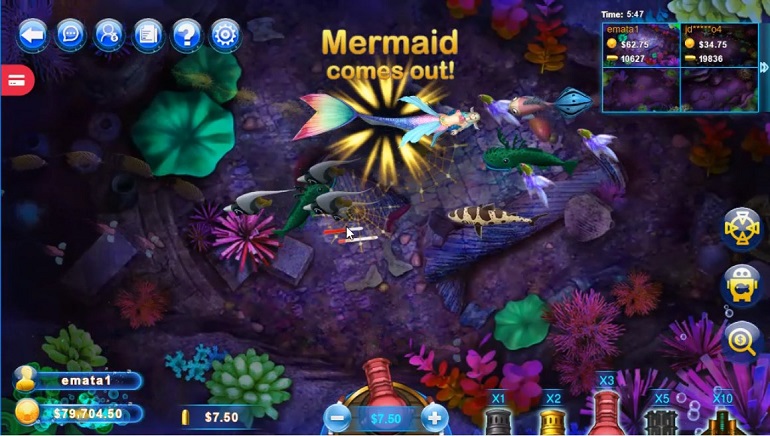 An underwater adventure awaits players in RTG Asia's Fish Catch game. It's a fast-paced, interactive game, where players win by shooting fish with their cannons

Fish Catch is the latest game from RTG Asia. It's an interactive, multi-player game where prizes are netted as fish are successfully hit. Look out for the special Mermaid's Luck wheel, where the top winnings are claimed.

Fish Catch isn't a slot machine and will appeal to gamblers looking for a new way to play. The action unfolds in an underwater world, where a downward view of the ocean depths reveals shoals of fish swimming past. The aim is to shoot enough bullets at a fish to catch it and collect a prize.

It's got a cartoon style, with a variety of aquatic targets such as sharks, turtles, clownfish and angelfish. Smooth animations add some realism to the action as these creatures swim around in all directions.

Before the games begin, players get to choose their stakes and can only catch fish that are at or below this amount. During the games, it's possible to change the bet level and to use more powerful cannons to shoot down the prey.

A special Mermaid's Luck wheel can appear at any time. This is a wheel of fortune that spins up winnings of up to 250x the total bet. Even if the top multiplier isn't awarded, a prize is guaranteed from this feature.

Although there's no jackpot in this game, maximum wins of 2,500.00 can be claimed when the Mermaid's Luck is triggered.

Dive In Across Desktop And Mobile Platforms

Fish Catch has been designed to work on multiple platforms, which will ensure that it can reach the widest audience. The fast pace and interactive gameplay will attract players who prefer console games over traditional slot machines.

It comes from the studios of Realtime Gaming (RTG) Asia, a rapidly-growing company that continues to deliver games to casino operators throughout the region.