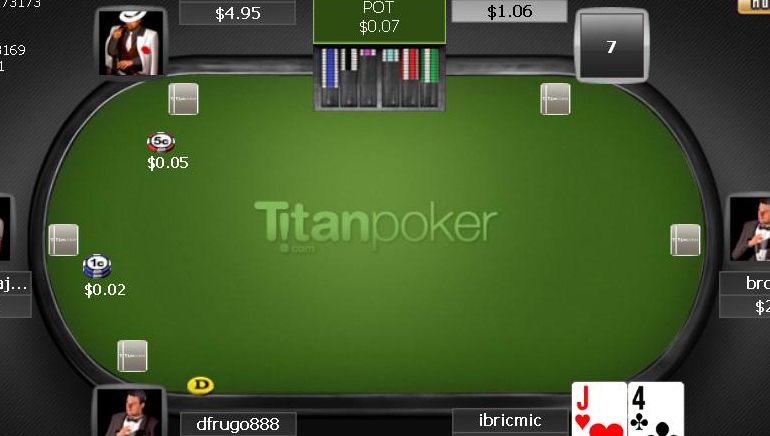 "Become a Legend" is the tagline featured on Titan Poker's homepage. A tall order for an online poker site, but an aspirational one nonetheless.

Titan was established in 2005 and has experienced some pretty impressive growth since then. Titan's poker rooms aren't as busy as some of the bigger online poker rooms but there are still around 2,000 players logged on during peak times - some highly impressive figures.

As for tournaments you'll find scheduled tourneys, sit 'N' go, satellites, as well as a special jackpot sit 'N' Go. There are high stakes on offer although most of the action is at the lower end of the spectrum which is good news for less experienced players. Titan's game repertoire includes the classics: Texas Hold Em, Omaha and Omaha Hi/Lo.

Part of the iPoker network and powered by Playtech, Titan's software is top quality. The interface and game cards are sharp and there are also some special features on offer. You can add buddies to a list, join the same tables as them and access a hand history with graphical poker cards.

So although we can't promise you'll become a poker legend, you're sure to find some solid poker action at a top quality, energetic site, on track to achieve great things.

The most rewarding features about Titan Poker include:

Places, however, where Titan Poker falls down are:

Titan Poker continues to stay on its game with regularly changing promotions and, with something for everyone, new and existing players alike will enjoy the promotional scheme. Plus, there are ongoing satellites to many of the major live poker events. While the welcome bonus is rather hefty, new players ought be warned that it could take a frustratingly long time to clear unless you typically play at the middle to higher end stakes. Bonuses are paid in increments of $5 and you are given three months to clear the bonus which is a little longer than many poker rooms. There are a number of scheduled big guaranteed tournaments such as Sunday's $250,000 Guaranteed Freezeout. Direct buy-ins to the event are $300 + $20 but players can also win a seat at one of the daily satellites. There is also $100,000 guaranteed every Friday and a third tournament, the $50,000 GP Freezeout, every Saturday. Titan Poker also offers a bad beat bonus to those players who were holding a top hand but lost nonetheless to an even better hand. Provided you are playing a real-money Texas Hold'em ring game and at the showdown had a hand of KKKK or better, you will win the bad beat bonus of $250. However, Titan players should be forewarned that the bonus is not automatically credited to your account. You must send an email to support with your sob story in order to claim it. On top of that, you might be in with a chance to win the Top Hand of the Day bonus which is $100 if you get a four of a kind KKKK or higher at a real money ring game. Finally, any player who refers a friend to Titan Poker receives a rather generous cash gift (as too does the friend).

The Titan Poker site, powered by Playtech, boasts strong overall functionality. The lobby is easy to navigate and whilst plain, is still somehow visually appealing. All the typical functions of a good poker room are there such as buddy lists, player notes and hand histories. You will also find stats in the lobby about average pot sizes and hand per hour. A often heard complaint, however, amongst players is that games can become pretty slow going as you are given plenty of time to think about your next move. On the upside, however, this is a bonus if you are considering taking advantage of the opportunity to play up to eight tables simultaneously. You have the option of completely customizing your game by changing various settings such as enabling ambient sound effects, selecting your background music, choosing your avatar or opting for the full screen mode. The site is available in 14 languages at the time of this review included English, German, French, Italian, Spanish, Polish, Swedish, Finnish, Norwegian, Danish, Italian and Dutch.

All players are automatically joined to the Titan VIP club which rewards frequent players with freeroll tournament entries and loyalty cash bonuses. Players earn points with every real money hand they play. The number of points awarded depends upon the size of a pot in any given hand but it roughly works out to 17 points per dollar of rake. If you manage to collect enough points in any given month, you'll qualify for a VIP level of which there are six. Points can be cashed in at the Club Titan Store for cash bonuses or tournament tokens.

There is a huge amount of traffic around European peak hours at the sit n go jackpots - particular at the lower to medium stakes. It would not be uncommon to find up to 5,000 cash games players and 25,000 tournament players. The available games at Titan Poker include Texas Hold'em, Omaha, Omaha Hi/Lo, Seven Card Stud and Five Card Stud and as with all poker site, Hold'em is the most popular. Titan Poker offers more than 100 daily tournaments and a variety of weekly special event tournaments with buy ins ranging from $1 + 1c to $300 + $20. There are also plenty of no-risk freeroll tournaments which novice players should take maximum advantage of to fine tune their poker skills.

If you win four Dirty Dozen Jackpots in a row, you will win the jackpot on top of the tournament winnings. This is a 12 player sit n go tournament. There are a number of other jackpot sit 'n' go tournaments on offer such as the $25,000 Rio jackpot or the progressive Maui jackpot where there is more than $15,000 in prize money.

The customer service personnel at Titan Poker are available 24 hours a day, 7 days a week and there is also live support. There is a toll free number for UK based players Inquires are known to be answered quickly and professionally and in fact Titan Poker promises that all questions will be personally replied to.

Deposits and withdrawals can be shown in your chosen currency. When you enter a ring game, the required part of your balance will be converted as per the exchange rate on that day into US dollars which is the site's standard currency. There are a variety of deposit methods including all the major credit cards, bank transfers, and third party processors such as Moneybookers, PayPal or Click2Pay. Transaction can also be made in Euro, pounds, US dollars, Canadian dollars and South African Rand. You can also pull up a detailed history of all your previous financial transactions such as your deposits, cash outs and bonuses which is all part of Titan Poker's complete transparency policy.